news from eargers, past and present

2017 - 2018: NEWS FROM THE CONFERENCE SCENE
Elizabeth Boyle presented her paper "Not 'the old story over again': Coming Womanhood and Coming-of-Age in Fettered for Life" at the American Literature Association conference in San Francisco

Dan Froid presented his paper "(Super)Vision: Optics and Instruction in The Governess" at the American Society for Eighteenth-Century Studies (ASECS) in Orlando

Stacey Dearing presented her paper "Signing Grace: Disability, Accommodation, and Political Enfranchisement in Increase Mather’s An Essay for the Recording of Illustrious Providences” at the Society of Early Americanists Special Topics Conference in St. Louis.

Brittany Biesiada presented her paper "'Not in the Least Fond of College Itself of the Work': Examining Educational Work in American College Girls' Novels" at the Children's Literature Association conference in San Antonio
2016 - 2017: NEWS FROM THE CONFERENCE SCENE
Amy Elliot presented her paper "Novels in Verse: Resisting Closure and Narrative Realism in Clough's Amours de Voyage" at NAVSA's annual meeting in Phoenix

Brittany Biesiada presented her paper "Overworked to Invalid(ated): Race, Gender, and Disability in Harriet E. Wilson’s Our Nig" at INCS's annual meeting in Philadelphia
​
Elizabeth Boyle presented her paper "To Make a Woman: Artistry, Inheritance, and the Coming Woman in The Story of Avis" at INCS's annual meeting in Philadelphia

Amy Elliot presented her paper "The Bodies of Shalott: Mixed Media and Visual Reproductions of Tennyson’s 'Lady of Shalott'" at INCS's annual meeting in Philadelphia

Amy Elliot presented her paper "'She reads entirely too much': The Voice of the Child in Literature in L. M. Montgomery’s Anne of Green Gables" at ChLA's annual meeting in Columbus

Fall 2012: News from the Conference Scene

Marie Basley-Taylor, "John Norton’s Millennial Justification for Violence Against Quakers in Puritan New England: Ushering in the End of the World" at the Tulsa Graduate Conference

Mary Beth Harris, "'Be not too curious to pry into the Reasons of Women': The Politics of Female Secret Keeping in Susanna Centlivre's The Perplex'd Lovers and The Wonder" at EC/ASECS

EARG alumna, Dr. Cassander Smith's article "Beyond the Mediation: Esteban, Cabeza de Vaca's Relación, and a Narrative Negotiation" is the lead piece in the latest issue, Volume 47 No. 2, of Early American Literature!  Read it at Project Muse.
7.12.2012: NEWS FROM PROFESSOR MANUSHAG POWELL

Professor Schneider is in the second year of his three-year appointment as Director of Graduate Studies for the English Department.  He also recently served a one-year term on the national review committee for the American Council of Learned Societies Postdoctoral Fellowship.  Professor Schneider recently completed his second Center for Undergraduate Instructional Excellence Fellowship at Purdue and was invited by the Philosophy and Literature Program to give a presentation on his research on Cognitive Literary Studies and Critical Race Theory for their annual Illuminations lecture series.  He also presented a paper on Transcendentalism and Critical Race Theory for the Thoreau Society panel at this year’s Modern Language Association Conference in Seattle, and he will be presenting a paper for the Emerson Society panel at the upcoming American Literature Association Conference in San Francisco.  His book, The Public Intellectualism of Ralph Waldo Emerson and W.E.B. Du Bois: Emotional Dimensions of Race and Reform, is the third title in Palgrave-Macmillan’s Cognitive Studies in Literature and Performance series.

Nicholas Mohlmann was awarded a Lord Baltimore Fellowship from the Maryland Historical Society for 2011-2012.  He spent a portion of July 2011 at the MDHS researching George Alsop's A Character of the Province of Maryland and the political and economic environment of Maryland in the 1660s.
8.15.2009: NEWS FROM DR. CASSANDER SMITH

Cassander Smith's paper "The Politics of Race and Place in Panama: Sir Francis Drake among the Cimarrons" has been accepted to the University of Alabama's Symposium on English and American Literature.  The symposium, entitled "Race and Displacement," is scheduled for October 1-3, 2009. The symposium focuses on the concept of racial diaspora -- removals, migrations, colonial and post-colonial geographies and transnational identities, both individual and collective.  What is the relationship between race and place in the various senses of those terms? What does race have to do historically with place?  What is the place of a given race, "its" place geographically, historically, in terms of social, educations, economic, and political traditions, hierarchies, power relations, etc. ? What is the "place" of a person in relation to race, as well as in regard to other forms of difference -- gender, sexuality, ethnicity; class, labor, ideology. Congratulations, Cassie, and good luck! 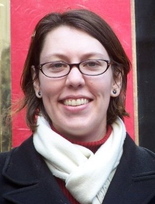 Dr. Nicole Livengood, in her first year as assistant professor of English at Marietta College, was presented the Outstanding Faculty Award at Marietta's recent commencement ceremony.  Congratulations, Nicole!
Powered by